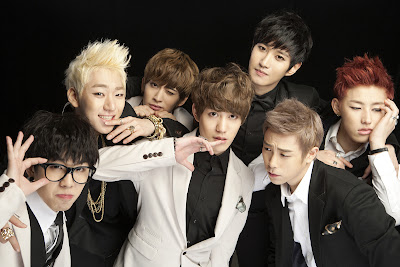 BLOCK B~
﻿
Name: Blockbuster 블락비
Members: Zico, Jaehyo, Taeil, P.O, B-Bomb, U-Kwon and Kyung.
Origin: Seoul, South Korea
Genres: HipHop, pop, kpop, R&B, dance.
Labels: Stardom Ent. (previously BrandNew Stardom Ent.)
Created by: Cho PD
Debut date: 15th April 2011
Debut Single: Freeze!   그대로 멈춰라!
Facts:
- In Block B's dorm there is one door with a picture of f(x)'s Sulli.
- Block B danced T-ara's Love Dovey in one of their Showcases (120201)
- Block B never learned from anybody. They all learned on their own before debut.
- There were 5 Block B members at first: Zico, Kyung, U-kwon, Mino, and Hanhae.
- B1A4's Jinyoung rejected Zico’s request of taking one selca with him because of Jaehyo’s plan.
- When Block B was asked of their first impression of Cho PD they said that he looked like a monkey. 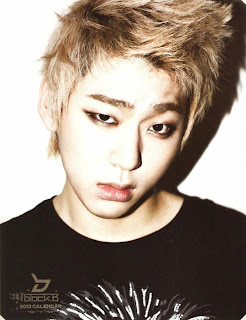 Family: His older brother is TaeWoon (Woo Jiseok), leader of SPEED and rapper of Coed School.

Hobbies: Shopping, read, watching American comedias, collecting Hello Kitty (because of his strong image, he chose Hello Kitty to "break" it a little bit but now he doesn't do this anymore).


Facts:
- Featured in IU’s Marshmellow.
- Also featured in HyunA's Just Follow.
- Zico was the one who wrote his rap lines in HyunA’s song, Just Follow.
- Childhood friends with Kyung
- Studied in Japan
- Released a mix tape in 2010 titled ZICO on the Block which contains 19 tracks featuring many other hip hop artists
- Plays/talks well with strangers
- Calls twitter a “blue bird” because he doesn’t know if he’s allowed to say it on TV
- Former SM Trainee, supposed to be part of SHINee.
- In-charge of waking everyone up.
- Released another mixtape in 2012 titled "Zico on the Block 1.5"
- Zico shaved his head once to show that he is throuing away the immaturity he showed to the people of Thay and anyone else.
- Knows how to dance Teen Top's Crazy.
- Zico think his biggest charm is his bubble lips. (I agree keke)
- He thinks that a girls with piercings are pretty.
- Wants to collaborate with CL.
- Zico thinks Sandeul of  B1A4 is cute.
- Zico made his signature simpler so that he can sign BBC’s albums and posters faster and easier.
- Zico had his first kiss when he was in 2nd year of highschool.
- Zico is really bad at saying directions.
- Produced the new mini album of D-Unit "Affirmative Chapter.1"
- Also produced OFFROAD, a rookie boyband, with their new concept music "Head Banging". 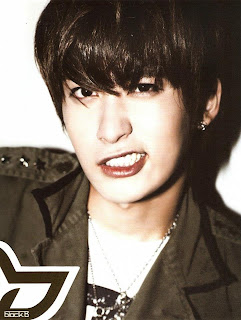 Fanclube name (Unofficial): Herp (because of his is a totally derp person)

Nickname: DerpHyo (Derp – to describe a retarded looking face because he has a lot of photos with a Derp face, specially since their Tell Them MV.)


Facts:
- An internet ulzzang.
- Best Nine School Ulzzang 3rd Generation
- A cast of Mnet 꽃미남 아롱사태 (2008) with Song Joongki.
- Won in 1st Place Mnet Pretty, Busan Category
- Can’t live without his electronics
- Friends with MBLAQ’s Lee Joon
- He thinks he is the most beautiful in Block B.
- Jaehyo is a bit closer to INFINITE's Myungsoo.
- Childhood friend with EXO's Luhan and has a pre-debut picture with him.
- Wants to collaborate with Minah from Girls Day.
- Jaehyo had his first kiss when he was in 2nd year of highschool. 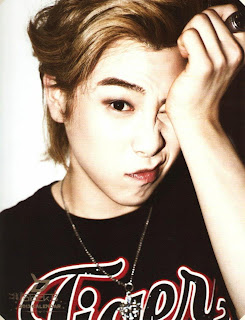 Nicknames: Whale and Piglet (Because he said that he looked like Piglet without glasses on.)


Facts:
- Admires Dara of 2NE1 and Sulli of F(x).
- Attended as a guest at Vibe Concert in 2010.
- According to the members, P.O is good at making up poses
- Played soccer when he was younger
- Thinks Kyung has no flaws
- Loves nachos
- Is Block B's troll.
- Love to make fun of his hyungs.
- At first P.O thought JaeHyo was a foreigner because he think Jaehyo is too good loocking.
- Wants to collaborate with Taeyang.
- P.O and Mino (BoM) are best friends 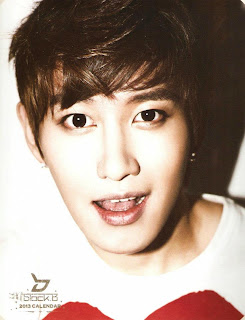 Fanclube name: Dimple (His type of girls are girls with dimples)

Nicknames: Grapefruit, Minhyuk-god (Because His hair is a color of a grapefruit. MTV Match Up in Japan referred to him as Minhyuk-god)

Ideal Type: ”My ideal girl is someone with cute dimples.” –B-Bomb


Facts:
- He trained with Infinite.
- Group 5 in Battle Shinhwa
- Won daesang for Coex Dance Jjang
- Won 3rd place for Mapo District Youth Champio
- Appeared in SBS Running Mackeral; KBS Supermom; Cho PD (Korea City) MV
- Has a habit going to sleep in one position and waking up in that same exact position.
- According to Kyung and Zico, he’s the most interested in porn
- Stays after to help TaeIl with choreography
- Afraid of heights
- Usually drink warm milk when he can't sleep.
- His last relationship was March 2012.
- According to Kyung B-Bomb is a selfish person
- Wants to collaborate with Jay Park 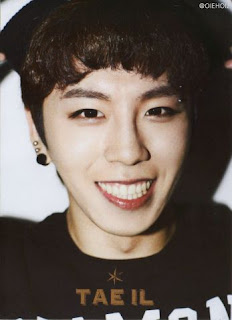 Nicknames: Shark (Because he was trolled by Kyung saying that Sharks(in Korean) in english is Jaws and Shark in english means male ‘Jaws’.)


Facts:
- He was in MBC’s “A Birth of a Great Star”.
- He won daesang at Green Bank’s Children Singing Competition
- He was featured in Han’s Band’s 2009 Winter Album as a chorus
- Has the hardest time with choreography
- Hates being woken up
- Taeil once slept in the bathtub until 4AM. He woke up because he was cold 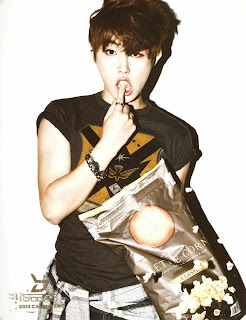 Nicknames: Kitty-Kwon, Mother-Kwon (Because in one of their shows he was impersonating a cat and in their MV shoot he played with cat. He is like the mother figure in Block B.)

Ideal Type: “As for me, I like women who look good with short cuts. I’m attracted to women with short hair.” –U-Kwon


Facts:
- Likes the anime One Piece
- Can dance while beat boxing
- Cleans the most
- Featured in “It’s Not Over” from Miss S Repackage Album
- Won the dance award at Anyang Youth Arts Festival
- Won the special award in a dance at Gyeongido Youth Arts Festival
- keeps his mother’s pic in his wallet.
- He used to like B2ST's music but after being in Block B, he began listening more to HipHop.
- His favorite times is the meals one.
- Wants to collaborate with BIGBANG 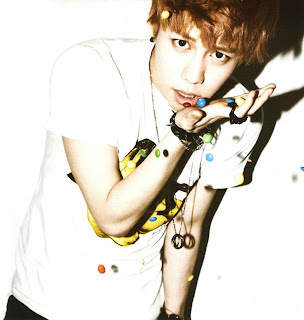 Nicknames: Cucumber, Kyungcumber (Why? Because he has a long face which Jaehyo said he looked like a cucumber.)

Education: Kamo High School (New Zealand) and briefly studied in the Philipines when he was young

Facts:
- Studied in New Zealand.
- He was childhood friends with ZICO.
- Started watching porn in elementary school
- Composed and rap in: Harmonix Digital Single (Letter); “Hope for Korean Hip Hop”; “Origin of Species” & “Map Music”; “It’s All Act”; “It’s Not Over".
- It wasn’t an easy decision to make, but Kyung decided to trust his elementary school friend Zico and join Block B.
- Used to play violin when he was young.
- Is allergic to cats.
- According to him the biggest charm of Block B is that they are not fake.
- He thinks that a girls with piercings are pretty.- Kyung's biggest passion are all BBCs, he is always saying thet he love them. He once said " lived in New Zealand for three years. But I live in my fans’ hearts now".
- Kyung knows about ‘ZiKyung’ couple.